Portrait Photographer Zachar Rise joins us on James Robinson Photography Blog. Thank you Zachar for sharing your thoughts and images with us. Where do you call home?

Zachar Rise: I were born in the Ukraine, In 1991 when I was 19 years old my family moved to Israel, so Israel is my home. I reside in the Southern district of the country.

JRP: What led to your interest in photography? Did you have any formal training in your background?

Zachar Rise: I have been taking photos since I was in grade school. Back then I used only black and white film. I lost interest in photography after grade school, but the seed remained and sprouted out a few years ago when I started to make photos of my kids. At the beginning I did it with a pretty simple digital camera, but at some point I felt that I wanted to make more professional looking photos. I bought my first DSLR, and even started building studio lighting by myself.

I do not have any formal training, all my knowledge I earned from my experience and of course from the Internet.

JRP: Who are some of the artists that have inspired and influenced your work?

Zachar Rise: I got a lot of inspiration from old painting masters, Rembrandt, Raphael, Caravaggio. One can learn a lot about lighting, colors, posing, and composition from them.

Regarding modern photographers, I like Mark Lagrange and Helmut Newton a lot.

JRP: How did you develop your vision and technique early on?

Zachar Rise: In the very beginning I learned a lot from the Internet articles. The Canon D40 user manual is very good quick start guide for the beginners. It not only explains camera technical details, but also very basic things like building composition, differences between portrait and landscape approaches, etc.

Another good approach for the more advanced phase is to just pick the photography that you like and try to re-create it.

JRP: Do you have people who assist you with your projects or do you tend to work alone?

Zachar Rise: Since I shoot mostly portraits there’s at least 2 people, me and the model. Sometimes I work with a team that includes make-up artist, stylist, hair designer.

JRP: What would I find in your camera bag for a typical shoot?

JRP: What type of lighting do you prefer, artificial or available light? What are your most often used light modifiers? 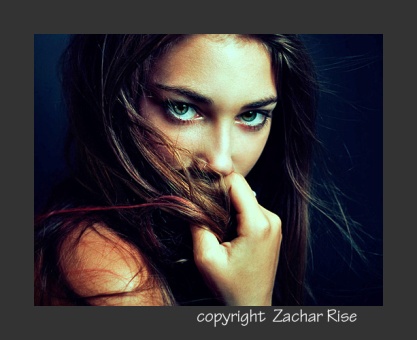 Zachar Rise: Photography is my hobby and I work during a daytime. I’m mostly available to shoot photo sessions in the evening when there is no sunlight, thus I have no choice but to use artificial studio light. I use simple monolight studio flashes usually equipped with a softbox. For modifiers I use reflectors, snoot, and umbrellas. When I have a chance to shoot outdoors I use natural light.

JRP: Please describe your digital work flow and the software you use? What steps have you taken to master your image processing?

Zachar Rise: I use Photoshop, with built-in Camera Raw software. Mostly I use RAW format. I’ll start with opening a RAW file and adjusting it a little in Camera Raw . Such things as white balance, image rotation, crop, etc.

Since I do mostly portraits the next significant step is skin processing and eyes. After that I correct colors using Color Efex or Tiffen plug-ins sometimes adding texture.

JRP: For you what is the most critical moment in the capture of your images?

Zachar Rise: I believe the most critical moment is catching the moment when a model’s pose, mood and expression is interesting and exceptional. Add that together with good lighting makes the image.

JRP: Name a shoot or project that revealed to you the distance you’ve come as an artist.

Zachar Rise: I think this is a shoot I did with my wife, that I called “4 green eyes”.

JRP: If not photography what would you be doing with your time?

Zachar Rise: Actually, since I am amateur and not a professional photographer most of my time is dedicated to my job and family. I wish I could spend more time with my photography. 🙂

JRP: So fas what has been the best advice given to you by another photographer?

Zachar Rise: Set you camera in the monochrome profile mode when setting up lighting. It allows you to see the light quality better.

Zachar Rise: Do not be afraid to try new things and change your style.

JRP: Thank you Zachar for sharing this time with us. It has been a pleasure talking with you. We wish you continued success.
To view more of Zachar Rise’s photography please follow this these links: